Traci Jutzi and daughter Sidney of New Hamburg model fashions during the show. Traci and Sidney are the daughter and granddaughter of Karen Jutzi, one of the volunteers that came up with the fashion show idea.

“That’s the most fun I have ever had for ten bucks!” totes one Gala for Gaza supporter after enjoying the fashion show fundraiser put on by the New Hamburg Thrift Centre on March 24. Volunteers and staff sported thrift store fashions and took to the catwalk with over 200 spectators in attendance. Following the show, attendees enjoyed decadent desserts and tea, on donated china, which was entirely donated by Phidellia’s on Peel Street. Baden Coffee Company donated the coffee for the event. The evening was a great success with $2,352 generated for humanitarian aid in Gaza provided by Mennonite Central Committee. Ticket holders were encouraged to bring MCC Relief Kit items and over 600 items were collected. Commentator Audrey Wilson of Gemini Models did a wonderful job adding her wit and charm to the event. Eric, owner of Thunderstorm Productions, donated his sound services and Mark Harrison of New Dundee Emporium spiffed up outfits with unique jewelry and accessories he carries in the store. Afterwards those attending were able to purchase items from Mark, with a portion of the proceeds going to the Gaza project. At the completion of the show, all fashions were immediately for sale. Most were snatched up instantly. “Clothes show much better this way than on a hanger!” said an enthusiastic shopper. When asked if there is a second show coming in the near future, staff responded with smiles. A fashion show attendee piped up and said “I sure hope so! I don’t think I’ve ever laughed so hard … my face hurts!”

Send us your Earth Hour photos

Did you take a photo of a lights-out activity, party, event during Earth Hour?

This photograph of an unidentified Methodist Church parsonage appeared in the New Hamburg Independent’s Heritage Edition last month. Donna Harrison submitted the photograph, complete with a hand-written description from a Mrs. Adam Knox, a school teacher from New Hamburg. Dated 1904 and labeled “parsonage” by Mrs. Knox, the only idea Harrison had about the photograph is that the home was the former home provided for the minister of a local Methodist congregation.

Since then, Mim Miller has identified the photo as the former parsonage for the New Hamburg Methodist Church erected in 1871 on the former East and West Street (now Huron Street). Today the parsonage is home to Town Pantry at 179 Union Street. The Methodist Church, which later became a school, was demolished in 1968 to make way for what is now the site of the fire hall, New Hamburg Board of Trade office and the Ernie Ritz Room next to the library.

The cash flooded in 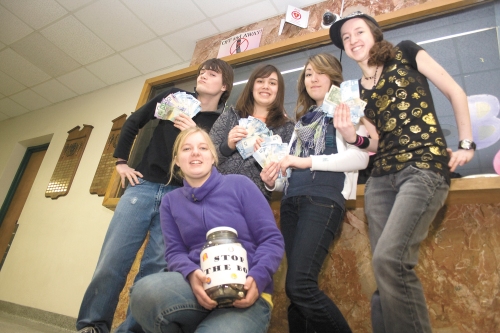 Waterloo-Oxford raised cash last week for the New Hamburg Flood Relief Fund. Students gathered $736 in the Stop the Bop campaign. A song was played at every opportunity over the PA system until students donated enough money to turn it off. Scott Malloch, Ashley Baer, Katie Gingerich, Alys Mak-Pilsworth and Aislinn Michie are members of the organizing group Students Without Borders.

There were a variety of March Break activities around the township last week. Students took in a magic show at the Baden Library on Tuesday afternoon, often getting involved in the act themselves. The Grand River Conservation Authority visited the New Dundee Public Library on Thursday, giving the children, like five-year-old Abigail Lyons, a chance to touch some creepy critters, such as this tree frog. There was also musical guests, including Paul Behnke who was at the New Hamburg Library. 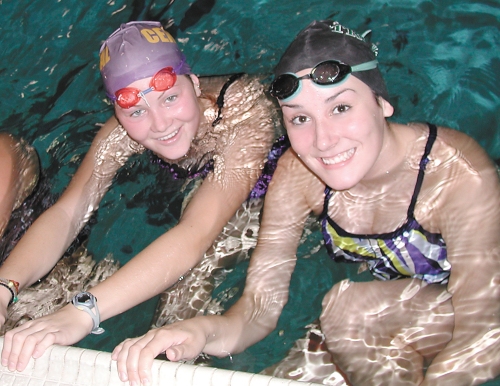 Sarah Sine and Jaime Doucet and will plunge into Lake Ontario and swim across the lake this summer to raise cash and awareness for multiple sclerosis.

Two Wilmot girls will be swimming across Lake Ontario this August in support of Multiple Sclerosis.

Jaime Doucet and Sarah Sine will plunge into the water in an attempt to raise cash and awareness for a condition that has touched both their lives.

The crossing has been named Making Waves for MS, and will take place on Aug. 1, weather permitting. Doucet’s father, Marc, has MS. Sines mother and aunt
both have MS as well. Swimming for MS entered Doucet’s mind about two years ago after she received a swim cap with the MS logo.

“It piqued her curiosity,” explained Marta Doucet, Jaime’s mom. Marta Doucet, an employee of the Independent, said she hopes the swim will raise knowledge of the condition. Much like Sam’s Swim raised awareness of juvenile arthritis, Doucet hopes her daughter can bring MS to the forefront of more people’s minds.

“MS is the same, you find it in little kids now,” she said. Susan St. John, of the Waterloo MS Society, is helping the girls coordinate their swim. “Its such an amazing
gift,” she said of the swim. St. John said she was amazed when she learned of the magnitude of the project the girls were undertaking.

“This is youth with a commitment you just don’t see,” she said. Several members of Sam Whiteside’s crew will be returning to help Doucet and Sine complete their lake crossing.
Sine told the Independent she wanted to do the swim because of her mother. “I want to do something special for her, it’s a good cause,” she said.

Sine said Jaime is a good friend of hers, and is excited about swimming across the lake with her.
A swimmer of five years, she is a bit nervous about completing the crossing. “Its going to be tough, mentally, physically, but I’m excited about it too.”

Sine swam on the Aces team for a number of years. She now swims with the University of Waterloo swim team, where she also attends school in her first year.

Jaime Doucet said the idea was first developed when she was swimming with Sine. Both girls decided they should do something tohelp benefit their parents.

In the past few months they hammered down the details and decided to announce their plans to swim across the lake.

There are no aspirations to break any records in their attempt to cross the lake.

The two girls will be swimming simply to raise cash and awareness. The stress level will also be lower because throughout the night the girls will swim relay style, swapping between resting on the boat and swimming.

The fundraising goal is currently $15,000. Doucet’s training regimen will be to just keep doing what she is doing. Jaime’s coach Joni says “Just keep swimming.”

Doucet’s training has been stalled until recently, as she was in a car accident that left her with a dislocated thumb, a sprained wrist
and sprained ankle.

“Now I’m back, and swimming faster than before.” she said.

Right now she is concentrating on training, but expects to be nervous when it comes time to cross the lake. “I’m just going to keep my dad in mind,” she said.

As more details on this story become available, the Independent will be closely covering them.

CLICK HERE to hear their full story and contribute to the cause.

Grandview Public School has won an award for their environmental efforts.
The school was one of four in the region to win the Tim Walker Memorial Award.
The school will receive a $500 prize, which will be used for birdhouses and feeders.
Grandview principal Heather Fields the school has been working on a number of projects over the past couple years.
A number of trees have been planted, along with gardens the students look after.
Each class also has its own bird feeder. The students look after stocking it with seed and checking out which birds visit it.
A number have disappeared or are broken, which is why the money will be helpful.

Callum Clark took first place in the Forest Glen science fair recently. The Grade 8 girl took top honours for her study of whether left or right brained students are more prone to academic success. Her conclusion is that ambidextrous people did better in school.